VANCOUVER, Canada — (January 27, 2021) Oroco Resource Corp. (TSX-V: OCO, US OTC: ORRCF, BF: OR6) (“Oroco” or “the Company“) is pleased to announce significant results from the deep, three-dimensional, Induced Polarization (“3D IP”) geophysical survey of its Santo Tomas porphyry copper project in Mexico.  The survey is now approximately 80% complete, and Oroco has received preliminary inversion data for all stations surveyed to date.  The preliminary inversion model has successfully mapped the resistivity and chargeability characteristics along a swath 2.1 km wide by 4.3 km along strike over the South Zone, North Zone and part of the Brasiles Zone.  The survey has reached the southern fringe of the prominent Brasiles zone gossans.  Geophysical crews have now re-mobilized to complete the planned program and to prepare additional survey lines to enlarge the north and south-east extents of the current survey area.  The Company has high confidence in the survey results.

“The preliminary 3D IP inversion modelling has revealed an extensive area of strong chargeability response that encloses the known North Zone deposit and extends beyond the historical drilling to the north, the west and to depth,” said Craig Dalziel, Oroco’s CEO.  “The response broadens below the North Zone and extends northward under the Brasiles limestone cap.  It is particularly informative and instructive.  The first 800 m of modelling of the Brasiles Zone indicates that the North and Brasiles Zones are a contiguous exploration target spanning an average of one kilometer in width and a minimum of two kilometers along strike at the 100 m level elevation.  The model remains open to the north.  In addition, the survey very importantly demonstrates a strong correlation between the chargeability features and the historical drill results in the South and North Zones as well as significant exploration potential lateral to both.  In short, we are extremely pleased with the survey results.”

The survey is being undertaken by DIAS Geophysical of Saskatoon, SK (“DIAS“) and utilizes their DIAS32 direct current resistivity and induced polarization (“DCIP“) system using a rolling layout of transmitter locations and a large receiver array that is advancing the survey in successive swaths from the south towards the north.  The preliminary inversion information will be subject to additional quality control procedures and certain modelling constraints from Oroco’s 3D geological model when the final data set is obtained.  The DIAS Geophysical DCIP system’s novel design has enabled surveying of rugged cliffs and areas that are not otherwise accessible for conventional induced polarization systems.  The method also provides coverage to depth and is a robust method for drill targeting.

Mr. Paul McGuigan, P. Geo., of Cambria Geosciences Inc., a Qualified Person under NI 43-101 and a senior consulting geoscientist to the Company, has reviewed and approved the technical disclosures in this news release.

The Company holds a net 61.4% interest in the collective 1,172.9 ha core concessions of the Santo Tomas Project in NW Mexico and may increase that majority interest up to an 81.0% interest with a project investment of up to CAD$30 million.  The Company also holds a 77.5% interest in 7,807.9 ha of mineral concessions surrounding and adjacent to the core concessions (a total project size of 8,980.8 ha).  The Project is situated within the Santo Tomas District, which extends from Santo Tomas up to the Jinchuan Group’s Bahuerachi project, approximately 14 km to the north-east. 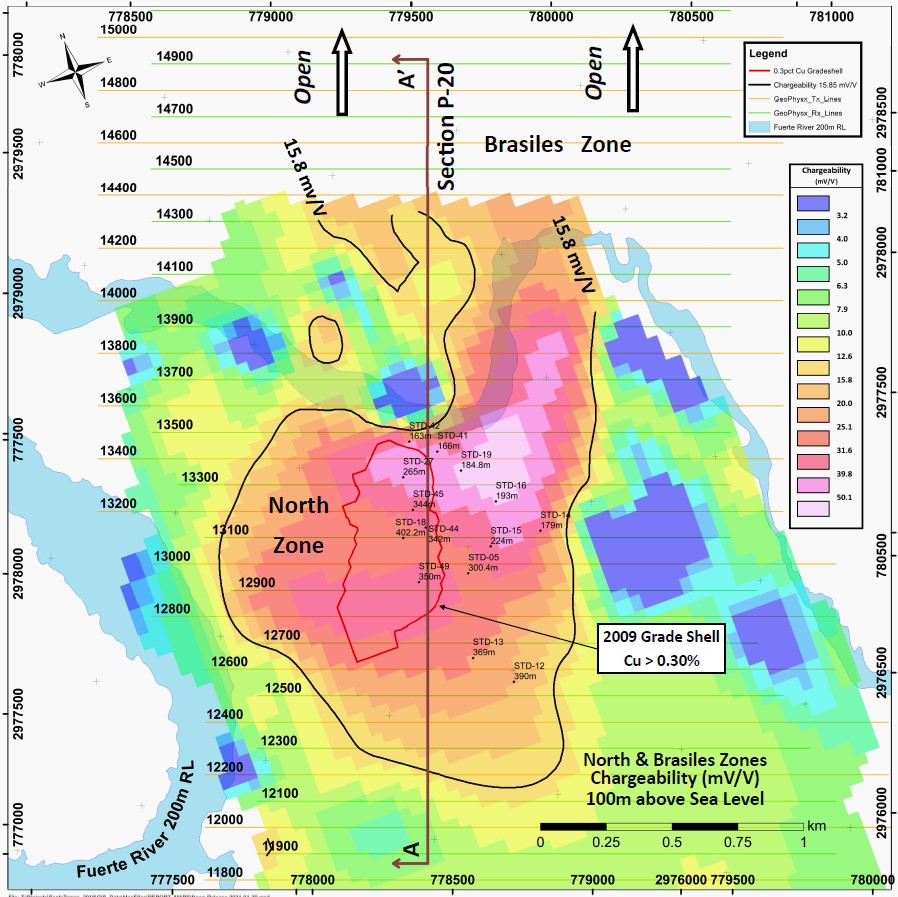 Figure 2: Longitudinal cross-section  A – A’  (refer to Figure 1)  through North Zone and southern Brasiles Zone, illustrating the continuity of +15.8 mV/V chargeability response from North Zone to Brasiles. The qualitative concordance between the geological model of the North Zone deposit (the “2009 Gradeshell”), lithologies, historical drill results, and the preliminary inversion model of chargeability is demonstrated.

Santo Tomas hosts a significant copper porphyry deposit defined by prior exploration spanning from 1968 to 1994.  The property was tested during that time by over 100 diamond and reverse circulation drill holes, totaling approximately 30,000 meters.  Based on data generated by these drill programs, a Prefeasibility Study was completed by Bateman Engineering Inc. in 1994.

The Santo Tomas Project is located within 160 km of the Pacific deep-water port at Topolobampo and is serviced via highway and proximal rail (and parallel corridors of trunk grid power lines and natural gas) through the city of Los Mochis to the northeast and the city of Choix.  The property is reached from Choix either by highway and then boat access on the Huites Reservoir, or by way of a 32 km access road which was initially built to service Goldcorp’s El Sauzal Mine in Chihuahua State. The reader is directed to the Oroco’s August, 2019 Technical Report filed on SEDAR, as amended, and on the Company’s website at