VANCOUVER, British Columbia – (June 23, 2022) Oroco Resource Corp. (TSX-V: OCO, OTC: ORRCF) (“Oroco” or “the Company”) announces the results of the first round of exploration drilling on the Brasiles Zone of its Santo Tomas property (the “Property”) in northwestern Mexico.  Six diamond drill holes are completed, of which results have been received for five.  A program of surface geological mapping is also underway by SRK Consultants (Canada) Inc. and the Company’s geologists.

Brasiles Zone is the locus for the most extensive area of altered, Laramide-age intrusion on the Property. Surface mapping and a co-incident zone of low resistivity in the Dias Geophysical 3D Induced Polarization survey (2021) delineate an extension of the prospective Laramide monzonite dike swarm and stocks for a total of 3.5 km north of the North Zone.

The initial round of diamond drilling was conducted in two regions of the Brasiles Zone.  The Brasiles Main Zone is a prominent gossan on the north bank of the Fuerte River.  Exall Resources Limited’s historical records cite three drill hole collars in that area but included no record of the drilling results.  The field programs could find no evidence of the drill collars at the reported locations.  Furthermore, two drill holes (B001 and B002) were collared to test that historical area.  Drilling encountered limestone, strongly altered and pyritic andesite volcanics and monzonite intrusion. No significant base or precious metal mineralization was intersected.

“While we were unable to identify any significant mineralization in the area of the Brasiles Zone most proximate to the historical exploration activity, we were very encouraged by our initial results from the Brasiles West Zone,” stated Craig Dalziel, Oroco’s Executive Chairman.

The Brasiles West Zone is located on the western fringe of the Brasiles Main zone. It is a NNE trending zone at surface, partly concealed under a veneer of post-mineralization Sierra Madre Occidental formation conglomerate.  The Company tested Brasiles West with diamond drill holes B003 to B006.  Assay results are available for all holes except B006.

See Figure 1, attached, or the Company’s website www.orocoresourcecorp.com for the location of the Brasiles Zone drilling.  Significant assay results from B003 to B005 are reported in Table 1.  Core intervals cited are near to true widths.  The drilling direction for B001 to B007 is towards 135° azimuth.

Most significantly, Brasiles West Zone has strong geological similarities to the North Zone, if somewhat attenuated.  Like the North Zone, monzonite dikes cutting the Cretaceous limestone (marble) are accompanied by skarn development and minor base metal mineralization.  Below the limestone, drilling encountered intensely fractured and altered andesite and monzonite porphyry dikes with chalcopyrite and pyrite in the same habit as the North Zone.

The major Santo Tomas structural zone is now documented in surface geological mapping in Brasiles West Zone for an additional 3.5 km northward of the North Zone.  Drill holes B003, B004 and B005 show that the first 1.0 km of that extension demonstrates similar mineralization to that of the North Zone.

The recently completed drill hole B006 lies in the untested gap between B005 and the North Zone.  Assay results are pending.  The Brasiles rig is now positioned on drill hole B007, which is located 400 m north of B003/B004 and is planned to test the northern extension of the Brasiles West Zone where it merges with Brasiles Main Zone. 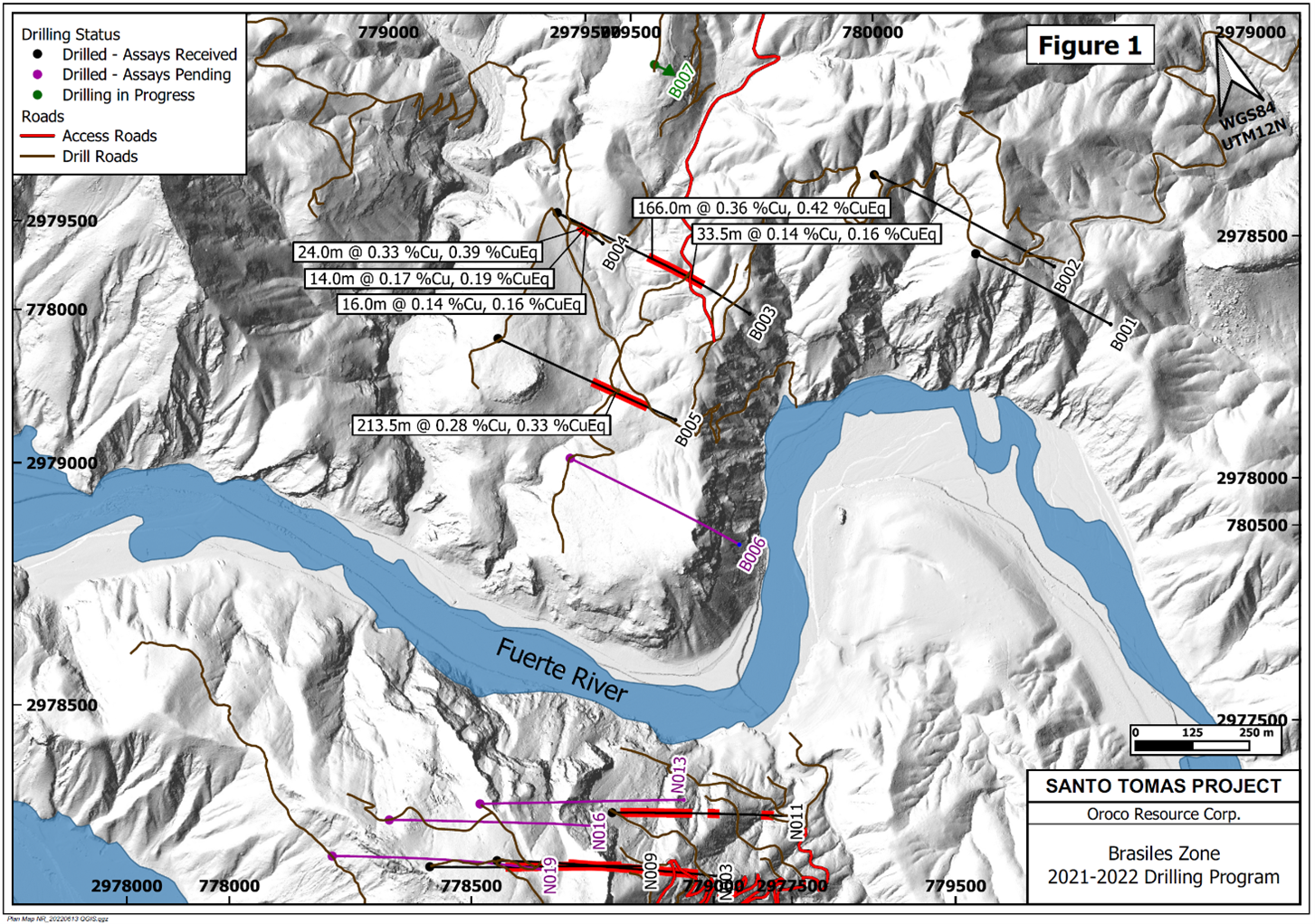 The historical drilling data employed in this current exploration program was the subject of Data Verification procedures cited in the current Technical Report.  Additional drill collar verifications were performed in the current program and collar locations fit closely to the 2021/2022 survey control.  Appropriate QA/QC protocols governed geological logging, core sampling, sample preparation, analyses, and security during the current program, including quality controls with duplicates, standards, and blanks.  Samples were submitted to the Mexican division of ALS Limited in Hermosillo, Mexico, for sample preparation to pulps.  Sample pulps are then sent to ALS Canada Ltd. in Vancouver, Canada, for analysis.  Total copper and molybdenum contents are determined by four-acid digestion with AAS finish.  Gold was determined by fire assay of a 50-gram charge, or alternately, for a 30-gram charge (1 Assay ton).

Mr. Paul McGuigan, P. Geo., of Cambria Geosciences Inc., a “Qualified Person” (as defined in NI 43-101 -Standards for Disclosure for Mineral Projects) and a senior consulting geoscientist to the Company, has reviewed and approved the technical disclosures in this news release.

The Company holds a net 73.2% interest in the collective 1,172.9 ha Core Concessions of the Santo Tomas Project in NW Mexico and may increase that majority interest up to an 85.5% interest with a project investment of up to CAD$30 million.  The Company also holds a 77.5% interest in 8,154.3 ha of mineral concessions surrounding and adjacent to the Core Concessions (for a total project area of 23,048 acres).  The Project is situated within the Santo Tomas District, which extends from Santo Tomas up to the Jinchuan Group’s Bahuerachi project, approximately 14 km to the northeast.  Santo Tomas hosts a significant copper porphyry deposit defined by prior exploration spanning the period from 1968 to 1994. During that time, the property was tested by over 100 diamond and reverse circulation drill holes, totalling approximately 30,000 meters. Based on data generated by these drill programs, a historical Prefeasibility Study was completed by Bateman Engineering Inc. in 1994.

The Santo Tomas Project is located within 160km of the Pacific deep-water port at Topolobampo and is serviced via highway and proximal rail (and parallel corridors of trunk grid power lines and natural gas) through the city of Los Mochis to the northern city of Choix. The property is reached by a 32 km access road originally built to service Goldcorp’s El Sauzal Mine in Chihuahua State.