As the 2021-2022 drilling program moves into its final phase, we are in the process of mobilizing a drill rig (Major Drilling’s) that is capable of drilling very shallow dipping to flat holes, to the south-west side of the Gradeshell where we do not have good access for angled holes.  We are targeting the expansion of the shallow seated mineralized zone on the hanging wall in this newly identified area.  Drilling will commence by mid-December with a view to being well established for continuation in the early New Year.

Above: With our small core staining facility operating in production mode, current and past/historical drill core is being stained to normalize rock classification and alteration classification toward a geological model: here cut core from hole S015 at 68.8m downhole shows stained potassic feldspar in a zone of Potassic Alteration – the rock being an intrusive Quartz Monzonite by composition.

The South Zone drill program will continue through to the Christmas break shutdown.

Some 1,026 samples (including duplicates and standards) were shipped from Ranchito to the assay lab during the week, including samples from drill holes N043, S011, S012, S013 and S014.

Geological modeling of the North Zone is now migrating to the ratification stage with the involvement and increasing oversight of external and independent consultants.  Some re-logging of historical and early drill holes is being directed so as to ensure a fit-for-purpose model of North Zone is prepared on schedule. 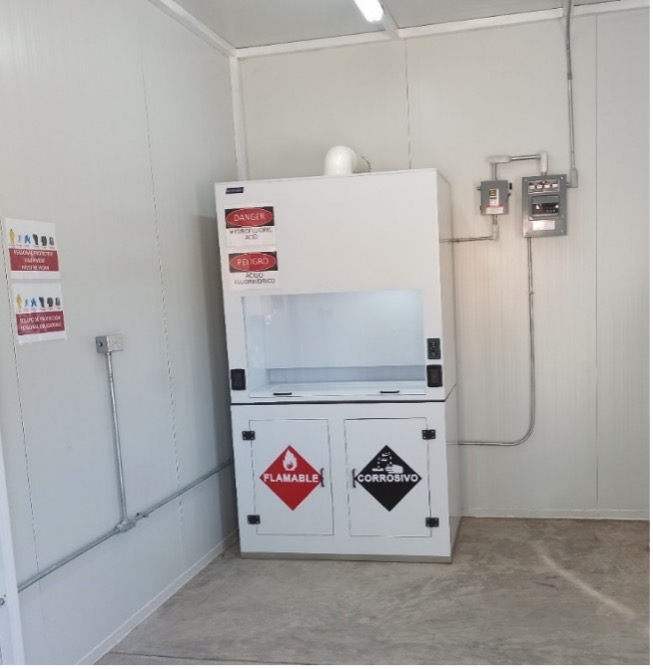 Above: Core staining facility, located at the north-end of the core storage facility – external and internal (fumehood).

Above: Hydrothermal Breccia intersected in hole S018 at 55m down-hole – an assemblage of chalcopyrite – pyrite – molybdenite along with tourmaline observed.

Below: Pervasive Potassic Alteration in Hole S018 at 65 downhole at 65m down-hole. Veinlets of chalcopyrite – quartz – pyrite related to fine biotite and chlorite.