KEY FACTS: Oroco Resource Corporation (TSX-V OCO) has announced the results from its initial diamond drilling campaign at Santo Tomas. The Assays reported in this release are for the first three modern holes in the North Zone. To date eight holes have been completed and drilling is currently ongoing in the North Zone and at the Brasiles Zone.

The 2021 drill program is aiming to confirm historical drill results and the Company’s geological modelling and investigate potential significant expansions to the historical resource as highlighted by the 3D IP survey conducted earlier this year.

COMMENT: In recent months numerous commentators and industry participants have highlighted concerns of a looming copper supply deficit due to a dearth of development projects and the prospect of increasing demand from the energy transition. Projected deficit numbers range from a three to more than ten million tonnes by the end of the decade, equivalent to adding the production capacity of 30 additional Quellavecos

In our recent “Copper Projects Review 2021” , an update on our 2019 report “The Cupboard is Nearly Bare”, we identified Oroco’s Santo Tomas project as one of the five globally significant copper development projects most likely to be subject to M&A activity.

These initial drill results mark an important milestone in the Oroco story.

Historical drilling at Santo Tomas consisted of wide spaced, vertical drill holes, many of which ended in high grade copper mineralisation, to a maximum depth of 300m and led to a preliminary feasibility study by Batemans Engineering in 1994 which scoped out a 125 ktpa copper operation from a resource of 2.63 Mt of contained copper. 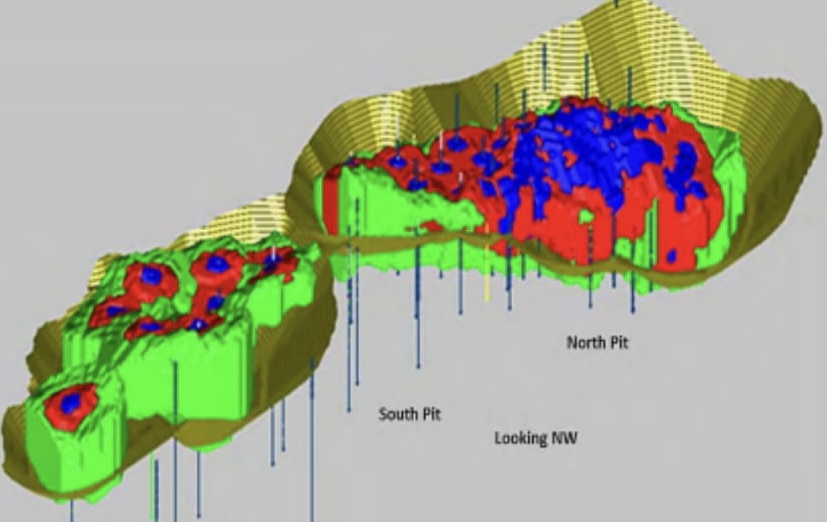 1994 Historic Resource in the South and North Pit:

Expansion Potential - Subsequent work by Oroco (2009, 2011 and a 2019 NI 43 101 Technical Report) led to a reinterpretation of the historical geological model.

The 2021 3D IP survey added impetus to this new picture, likely verifying the new geological interpretation by doubling the depth of the potential mineralisation footprint to 600m, while also highlighting potential high-grade drilling targets closer to surface within the North Zone and significant exploration potential lateral to the South and North zones. Additionally, in what could be a significant new discovery, it identified further potential beneath the limestone cap and gossanous material at the Brasiles zone. In total the survey outlined a footprint of approximately 5km by 1km. 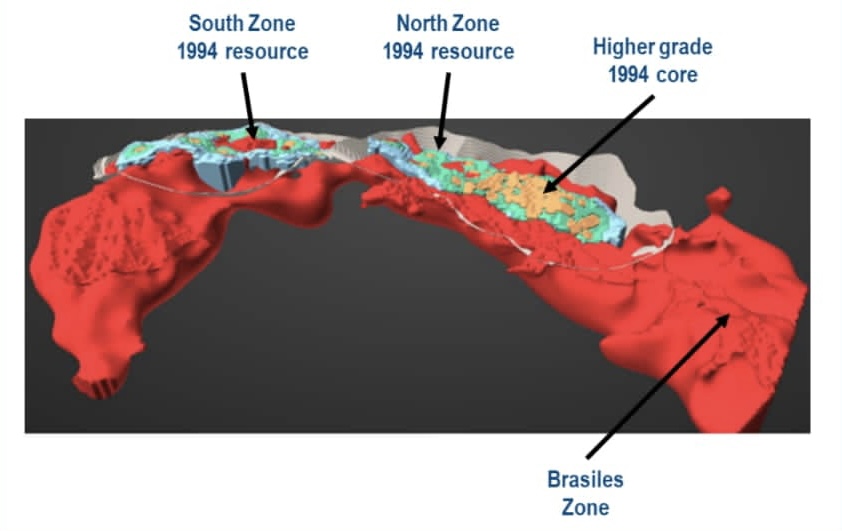 The 3D IP data suggests that the area of mineralization is firstly at least as deep again as the historical resource (x2) and secondly covers an area at least 2-3 times the historical resource. Obviously, drilling is necessary to determine the grade of the mineralised material, but it is worth noting that there is a strong correlation between the IP chargeability and the known historical resource, which, so far has been confirmed through the first new drill holes.

The current drilling is part of a planned 70 km + drilling campaign and these initial holes are based on angled drill holes oriented perpendicular to the re-modelled strike and dip of the deposit and is the first program that features drill holes that pass from the hanging wall of the North Zone deposit into the footwall and which also features a full suite of assay information that includes copper, molybdenum, gold and silver.

It is early in the campaign, however the initial results appear to confirm the tenor and size of the historical resource with potential for large extensions. The drills are now testing the potentially hugely significant Brasiles Zone. We look forward to seeing further results over the coming months.

As we discussed in our June report we believe that a resource of at least 3-4x the original historical resource, equivalent to 7.95-10.60Mt of contained copper, could be outlined over the course of the next 18-24 months through continued exploration.

Santo Tomas is at low altitude, is proximal to infrastructure and in a decent mining jurisdiction. With ongoing success it is likely that Santo Tomas will continue to feature prominently on the watchlist of major miners wishing to replenish their development pipelines.