The week was characterized by a number of rigs completing holes, so meters were down a little from
the prior week but we performed downhole surveys on five holes, which is the highest number yet in
a weekly reporting period. We included downhole IP surveys on two holes – including S002 in South
Zone. The data collected will assist us in reprocessing the DCIP survey data collected over six months
in 2020 – 2021, which will finesse targeting and extend the utility of that keystone survey.

With the larger drill rig fleet we drilled some 1,182m: N034, N036, N037, S002 & S003 were
completed during the week, so we had a number of drill-moves, which were all completed
successfully, increasing our confidence in ongoing drill fleet expansion.

Some 460 samples (including duplicates and standards) were shipped from Ranchito to the assay lab
during the week: these samples included material from holes N035 and S002, and S003.
Tucson-based AUSENCO confirmed the arrival of our metallurgical sample suite in Canada: the
samples will be processed at ALS Metallurgical in Kamloops, and ALS assumed the chain of custody of
the samples at Ranchito the week prior. The samples are expected to clear customs immediately.

Some of the members of the site team on their break rotation joined Ian Graham in attending the
Discoveries Conference 2022 in Hermosillo during the week.

The team took some core, maps and model visuals for a ‘core booth’, and Ian and Miguel Quintana, Senior Geologist, presented a project, corporate and technical update. 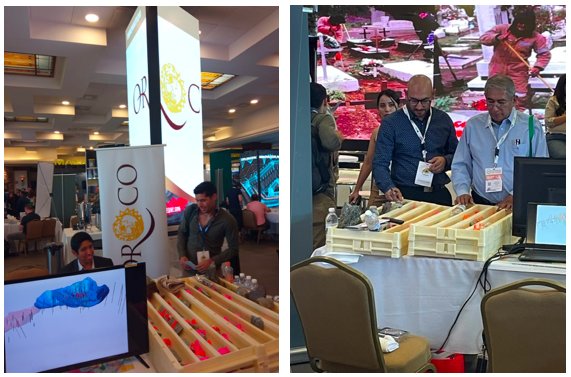 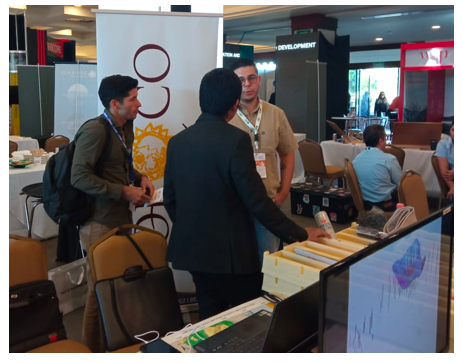 VANCOUVER, British Columbia – (October 4, 2022) Oroco Resource Corp. (TSX-V: OCO, OTC:
ORRCF) (“Oroco” or “the Company”) announces assay results from an additional 3,594 m of drilling
from Holes N019 through N026 of its drilling program in the North Zone of its Santo Tomas property
(the “Property”) located in northwestern Mexico (see Table 1 below and Figure 1 attached, or at the
Company’s website).  To view an interactive 3D model that includes the results announced today, use
the following link or visit Oroco's website: https://vrify.com/companies/oroco-resource-corp
The current drill program is continuing to confirm and expand the 2009 Gradeshell model of Cu
>0.30% (the “Gradeshell”) derived from the historical drilling described in the Company’s 2019
Technical Report.  A total of 35 holes (22,769 meters of drilling) have now been completed in the
North Zone, spanning approximately 1,300 meters of strike length, with intersections of good grade
mineralization returned in all holes for which the Company has received assays.

- Drill hole N020 was drilled approximately 240 m to the south of Holes N015 and N017 in an
area with limited historical drill testing and returned significant intervals within and outside
the Gradeshell.

Richard Lock, CEO, commented: “We are very pleased that the drill results continue to expand the
North Zone deposit relative to the Gradeshell.  In addition, our recent increase in the number of drills
from four to six allows us to dedicate two rigs to target the confirmation and expansion of the
historical South Zone mineral resource.  We are therefore focused on providing a combined North
Zone and South Zone mineral resource estimate to support our upcoming Preliminary Economic
Assessment.”

All drill holes tested the North Zone deposit perpendicular to its structural attitude.  Core intervals
are within approximately 10% of true thickness.  Assay results and cross-sections through the first
twenty-six North Zone drill holes (18,136 m of drilling) are available at the Company’s website.

Extension of the Deposit to the West

The Company’s new strategy of drilling angle holes from the hangingwall of the deposit has reliably
intersected a previously untested western shoulder to the main body of North Zone mineralization
that is blind to the surface.

Defining Shallow, Higher-grade Mineralization Along the Central Axis of the North Zone
Drill holes N022, N023, N025 and N026 targeted shallow-seated mineralization in the eastern section
of the North Zone with the goal of confirming the historical results which were generally of a higher-
grade.  The current drill holes not only confirmed the mineralization in this area, but also returned
intervals of mineralized material that are generally higher grade than the comparable historical
results.

Drill hole N025 (Plate 59) returned an interval, starting from surface and extending below the
Gradeshell, of 286.0 m of 0.45% CuEq. This intersection is one of the most significant in the current
drilling program.

Extension Along Strike to the South

Historical drilling delineated approximately 1,600 m of strike length to the North Zone. The southern
500 m of that length is blind to the surface, sparsely drilled, and open to discovering mineralization at
depth and on the shoulders of the main deposit.

Drill hole N020 is currently the southernmost of the North Zone drill program, lying approximately
240 m south of Holes N015 and N017, and extending the strike length of the North Zone drilled by
the Company to about 1,300 m. The hole returned 151.6 m of 0.49% Copper Equivalent (CuEq), much
of which lies outside the Gradeshell.  Drilling is currently planned for areas north, south and down dip
(to the west) from Hole N020. 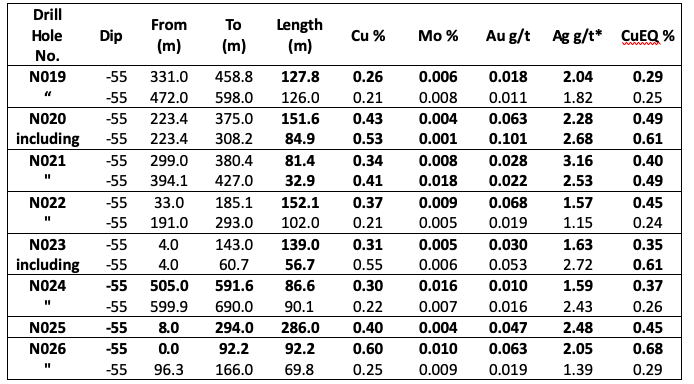 NORTH ZONE PROGRAM
The North Zone drilling program is designed to confirm and expand the 2009 Gradeshell model,
delineate near-surface mineralization amenable to open-pit mining methods, and reduce waste rock
stripping ratios (refer to the August 24, 2022 release for a fuller description of the program).
To date, the program has confirmed good grade mineralization in a gently north-plunging panel along
the Santo Tomas ridge, extending 1,300 meters along strike at surface.  The panel dips to the west
and comprises consistent grades down-dip to about 400-500 m depth below the ridge, bottoming at
about sea level.

The Company’s focus in the North Zone for the rest of 2022 is threefold: (1) to continue expanding
the mineralized zone on the hanging wall to the west of the Gradeshell along the length of the
deposit to potentially increase the resource and reduce the amount of waste rock stripping required;
(2) to continue targeting the shallow seated mineralization in the eastern section of the North Zone
to continue to confirm the higher grade shallow seated mineralization along the length of the
deposit; and (3) to drill the relatively untested 600 m to the south of holes N015 and N017 (see
Figure 1 attached) along which the North Zone is shown to extend.  This area of the North Zone is
prospectively of greater width and depth than the historical modeling and the Company intends to
drill it with regular spacings to potentially establish a mineral resource in this area.

The historical drilling data employed in this current exploration program was the subject of Data
Verification procedures cited in the current Technical Report. Additional drill collar verifications were
performed in the current program, and collar locations fit closely to the 2021/2022 survey control.
Appropriate QA/QC protocols governed geological logging, core sampling, sample preparation,
analyses, and security during the current program, including quality controls with duplicates,
standards, and blanks. Samples were submitted to the Mexican division of ALS Limited in Hermosillo,
Mexico, for sample preparation to pulps. Sample pulps are then sent to ALS Canada Ltd. in
Vancouver, Canada, for analysis. Total copper and molybdenum contents are determined by

four-acid digestion with AAS finish. Gold was determined by fire assay of a 50-gram charge, or alternately,
of a 30-gram charge (1 Assay ton).

Mr. Paul McGuigan, P. Geo., of Cambria Geosciences Inc., a “Qualified Person” (as defined in NI 43-
101 -Standards for Disclosure for Mineral Projects) and a senior consulting geoscientist to the
Company, has reviewed and approved the technical disclosures in this news release. The Company
strictly adheres to CIM Best Practices Guidelines in conducting, documenting, and reporting the
exploration activities on its projects.

The Company holds a net 73.2% interest in the collective 1,172.9 ha Core Concessions of the Santo
Tomas Project in NW Mexico and may increase that majority interest up to an 85.5% interest with a
project investment of up to CAD$30 million. The Company also holds a 77.5% interest in 8,154.3 ha
of mineral concessions surrounding and adjacent to the Core Concessions (for a total project area of
23,048 acres). The Project is situated within the Santo Tomas District, which extends from Santo
Tomas up to the Jinchuan Group’s Bahuerachi project, approximately 14 km to the northeast. Santo
Tomas hosts a significant copper porphyry deposit defined by prior exploration spanning the period
from 1968 to 1994. During that time, the property was tested by over 100 diamond and reverse
circulation drill holes, totalling approximately 30,000 meters. Based on data generated by these drill
programs, a historical Prefeasibility Study was completed by Bateman Engineering Inc. in 1994.
The Santo Tomas Project is located within 160km of the Pacific deep-water port at Topolobampo and
is serviced via highway and proximal rail (and parallel corridors of trunk grid power lines and natural
gas) through the city of Los Mochis to the northern city of Choix. The property is reached by a 32 km
access road originally built to service Goldcorp’s El Sauzal Mine in Chihuahua State.
For further information, please contact: