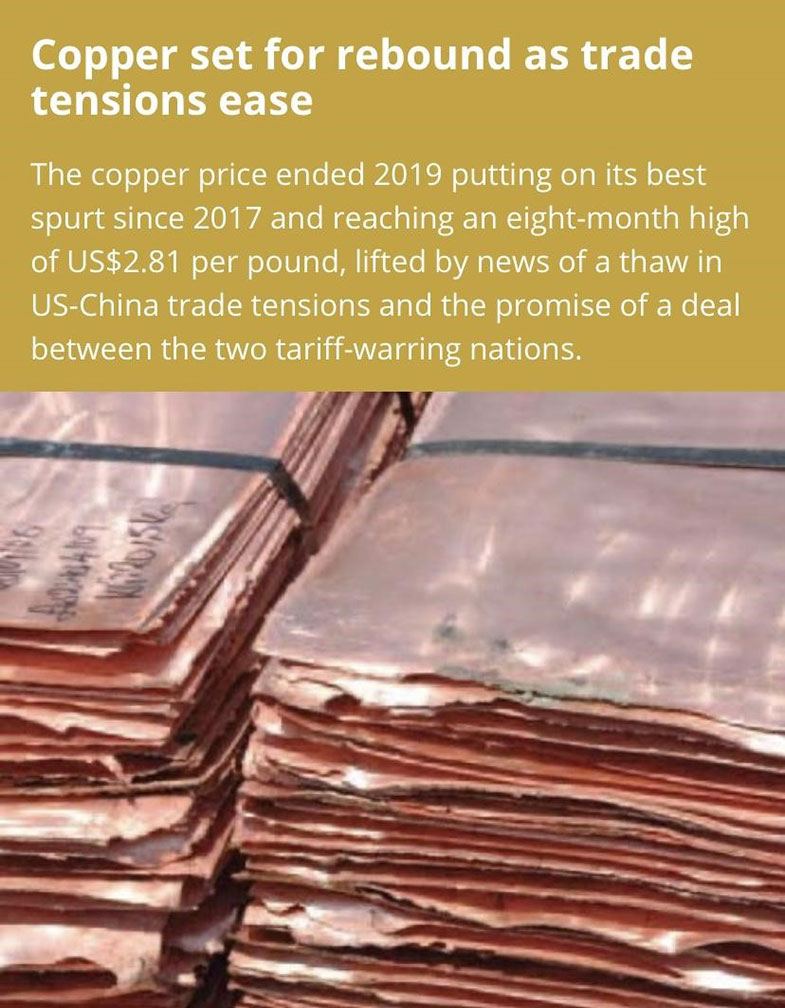 Copper rose 6.7% in December. The month saw an average price of $2.74/lb, improving on an otherwise stagnant 2019 for the red metal, which saw an average price of $2.72/lb, down 20c or 7% from its $2.92/lb average in 2018. Last year was one in which copper’s impetus to rise was checked by the US-China trade dispute, despite a growing tightening in copper supply as evidenced by treatment and refining for copper concentrates falling to lows of $67/6.7c.

Mine supply is reducing as lower grades continue to bite, notably at the emblematic BHP-operated Escondida mine in northern Chile, where production fell 8.4% in the nine months through September 2019 to 870,970 tonnes compared with 950,889t produced in the same 2018 period.

With lower prices and lower production, Escondida’s 2019 profits were below previous years. Escondida saw profits fall 20% to $1.1 billion in the nine months to September 2019 while Chile’s state copper company Codelco saw a 57% drop to $603 million in the same time period.

Lower profits and sub-$3-3.50/lb prices mean copper miners are hesitant to invest in new capacity. However, Chile’s Cochilco copper research agency reported that the country would see $10.4 billion in mining investment in 2020, some 57% more than in 2019, with 85% of that earmarked for copper projects.

“From a more macro point of view, there remains a deep disconnect, relatively speaking, between low prices and low inventories of metal held in warehouses. One does not need to spend a great deal of time doing an in-depth analysis of the markets to see the incongruity, just glance at where inventories were for each [base] metal a few years ago, and where they stand now and you will see our concern,” said copper consultant John Gross in the Copper Journal Monthly Report published in early January.

Peru, meanwhile, expects $6.2 billion in mining investment in 2020 in seven projects, although the majority of that investment will be in precious metals projects and base metals other than copper.

This includes a $579 million brownfield expansion at the Corani silver mine in Puno by Bear Creek Mining to lift its production to 9.6 million ounces a year. In northern Peru, the Yanacocha Sulphides project represents investment of $2.1 billion to optimise tailings storage at the gold mine, which from 2023 will produce 350,000oz/y and 544,000t of copper. Polymetallic miner Buenaventura is also expected to start construction of its San Gabriel gold project in Moquegua with an investment of $431 million.

Glencore subsidiary Minera Antapaccay plans to invest $590 million in the Coroccohuayco copper project in Cusco, which aims to extend the life of the Tintaya mine and see it process 20,000 tonnes per day to produce 105,000tpy of copper.

“As a result of delays in obtaining permits and the different administrative and bureaucratic obstacles, investment in mining exploration maintains worrying contractual trends. Thus, while in 2018, $413 million in investments were reported, this year we will hardly approach $360 million,” executive director of the SNMPE, Pablo de la Flor, said in a statement.