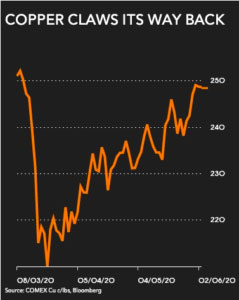 Copper trading in New York jumped to $2.5025 a pound ($5,515 a tonne) in lunchtime trade, bringing the bellwether metal’s gains since its mid-March low to just under 27%.

BMO Capital Markets, in a research note points out that data from China’s Ministry of Finance show the value of special purpose bonds issued – destined for local government spending on infrastructure – has already surpassed the full-year total in 2019.

Needless to say, all of these investments need massive amounts of copper.

China already consumes more than half the world’s copper and its refineries are sucking in concentrate at higher rates than the record setting 2019 total of 22m tonnes.

Now the country is going into overdrive.

The latest SMM survey of copper wire and cable fabricators shows a rise in operating rates in May to 101.7%, the highest level in the history of this survey, BMO says.

That’s mainly thanks to purchases from the world’s no 1 buyer of copper – China’s State Grid – after Beijing massively inflated its budget. At the same time copper stocks held in the bonded zone are now below 250,000 tonnes for the first time in the past seven years.