CIVILIZATIONS HAVE RECOGNIZED COPPER’S ANTIMICROBIAL PROPERTIES FOR CENTURIES. IT’S TIME TO BRING THE MATERIAL BACK.

These ancient civilizations were referring to copper, a material that cultures across the globe have recognized as vital to our health for more than 5,o00 years. When influenzas, bacteria like E. coli, superbugs like MRSA, or even coronaviruses land on most hard surfaces, they can live for up to four to five days. But when they land on copper, and copper alloys like brass, they begin to die within minutes and are undetectable within hours. “We’ve seen viruses just blow apart,” says Bill Keevil, professor of environmental healthcare at the University of Southampton. “They land on copper and it just degrades them.”

No wonder that in India, people have been drinking out of copper cups for millennia. Even here in the United States, a copper line brings in your drinking water. Copper is a natural, passive, antimicrobial material. It can self-sterilize its surface without the need for electricity or bleach.

Copper boomed during the Industrial Revolution as a material for objects, fixtures, and buildings. Copper is still widely used in power networks—the copper market is, in fact, growing because the material is such an effective conductor. But the material has been pushed out of many building applications by a wave of new materials from the 20th century. Plastics, tempered glass, aluminum, and stainless steel are the materials of modernity—used for everything from architecture to Apple products.  Brass door knobs and handrails went out of style as architects and designers opted for sleeker-looking (and often cheaper) materials.

Now Keevil believes it’s time to bring copper back in public spaces, and hospitals in particular.  In the face of an unavoidable future full of global pandemics, we should be using copper in healthcare, public transit, and even our homes. And while it’s too late to stop COVID-19, it’s not too early to think about our next pandemic.

THE BENEFITS OF COPPER, QUANTIFIED

We should have seen it coming, and in reality, someone did.

In 1983, medical researcher Phyllis J. Kuhn wrote the first critique of the disappearance of copper she’d noticed in hospitals. During a training exercise on hygiene at Hamot Medical center in Pittsburgh, students swabbed various surfaces around the hospital, including toilets bowls and door knobs. She noticed the toilets were clean of microbes, while some of the fixtures were particularly dirty and grew dangerous bacteria when allowed to multiply on agar plates. 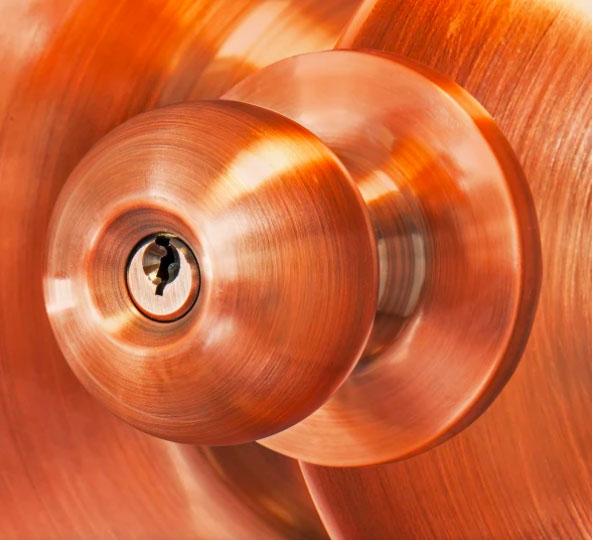 “Sleek and shining stainless steel doorknobs and push plates look reassuringly clean on a hospital door. By contrast, doorknobs and push plates of tarnished brass look dirty and contaminating,” she wrote at the time. “But even when tarnished, brass—an alloy typically of 67% copper and 33% zinc—[kills bacteria], while stainless steel—about 88% iron and 12% chromium—does little to impede bacterial growth.”

Ultimately, she wrapped her paper up with a simple enough conclusion for the entire healthcare system to follow. “If your hospital is being renovated, try to retain old brass hardware or have it repeated; if you have stainless steel hardware, make certain that it is disinfected daily, especially in critical-care areas.”

Decades later, and admittedly with funding from the Copper Development Association (a copper industry trade group), Keevil has pushed Kuhn’s research further. Working in his lab with some of the most feared pathogens in the world, he has demonstrated that not only does copper kill bacteria efficiently; it also kills viruses. (In 2015, he even demonstrated this phenomenon with a precursor to COVID-19, coronavirus 229E).

In Keevil’s work, he dips a plate of copper into alcohol to sterilize it. Then he dips it into acetone to get rid of any extraneous oils. Then he drops a bit of pathogen onto the surface. In moments it’s dry. The sample sits for anywhere from a few minutes to a few days. Then he shakes it in a box full of glass beads and a liquid. The beads scrape off bacteria and viruses into the liquid, and the liquid can be sampled to detect their presence. In other cases, he has developed microscopy methods which allow him to watch—and record—a pathogen being destroyed by copper the moment it hits the surface.

The effect looks like magic, he says, but at this point, the phenomena at play is well-understood science. When a virus or bacteria strikes the plate, it’s flooded with copper ions. Those ions penetrate cells and viruses like bullets. The copper doesn’t just kill these pathogens; it destroys them, right down to the nucleic acids, or reproductive blueprints, inside.

“There’s no chance of mutation [or evolution] because all the genes are being destroyed,” says Keevil. “That’s one of the real benefits of copper.” In other words, using copper doesn’t come with the risk of, say, over-prescribing antibiotics. It’s just a good idea.

IN REAL-WORLD TESTING, COPPER PROVES ITS WORTH

Outside of the lab, other researchers have tracked whether copper makes a difference when used in real-life medical contexts–which includes hospital door knobs for certain, but also places like hospital beds, guest-chair armrests, and even IV stands.

But what about expense? Copper is always more expensive than plastic or aluminum, and often a pricier alternative to steel.  But given that hospital-borne infections are costing the healthcare system as much as $45 billion a year—not to mention killing as many as 90,000 people—the copper upgrade cost is negligible by comparison.

Keevil, who no longer receives funding from the copper industry, believes the responsibility falls to architects to choose copper in new building projects. Copper was the first (and so far it is the last) antimicrobial metal surface approved by the EPA. (Companies in the silver industry tried and failed to claim it was antimicrobial, which actually led to an EPA fine.) Copper industry groups have registered over 400 copper alloys with the EPA to date. “We’ve shown copper-nickel is just as good as brass at killing bacteria and viruses,” he says. And copper nickel doesn’t need to look like an old trumpet; it’s indistinguishable from stainless steel.

As for the rest of the world’s buildings that haven’t been updated to rip out the old copper fixtures, Keevil has a piece of advice: “Don’t remove them, whatever you do. These are the best things you’ve got.”